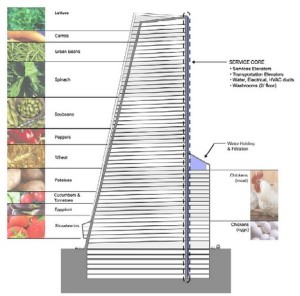 Last night, I attended a lecture by vertical farming proselytizer Dickson Despommier at the New York Academy of Sciences. The notion of vertical farming is generating an increasing amount of excitement, in large part because of a growing number of fanciful designs of slender high-rises bursting with a cornucopia of vegetables and livestock. I was hoping to come away with a clear and cogent explanation of why multi-story farms are a better strategy for food production than horizontal farms, but I was sorely disappointed.

Despommier claimed several ecological features of the vertical farm: there is no agricultural runoff, crop production can occur year-round, severe weather does not result in crop loss, the buildings use 70% less water than a traditional farm, and there are “no fossil fuels, no pesticides, and no herbicides” used in production. Of course, assuming that solar density is even sufficient to grow crops in a tall building located in the middle of a city, these supposed benefits could be realized only with a significant input of embodied and operational energy, with enormous construction, operational, and maintenance costs. I suspect that the same benefits could be achieved at much lower cost by upgrading a conventional farm with new technologies and expertise.

Moreover, planners need to address the significant social and political implications of a vertical farming future. To what extent does a high rise farm rely on specialized expertise, patented technologies, and centralized infrastructure, and is such a model preferable to lower tech alternatives?

Until there is a serious life cycle analysis of vertical farming, and a clear enumeration of construction and production costs, and careful consideration of social impacts, the vertical farming project strikes me as a significant distraction from a far more pressing need: (1) reviving the small and mid-size farms that exist around our major metropolitan areas, (2) carving out new spaces in cities and suburbs to grow food closer to people, and (3) financing the infrastructure – from greenhouses to wholesale farmers markets — to make horizontal farming more ecologically sound, efficient, and profitable.